This is the end.

In this empire of the corpse.

And on this day. On this very day. I died.

All will be explained ... in time.

prolegomena:
He is in the end right now, and now he never ends.

I am Alpha and Omega, the beginning and the end, the first and the last.

You have looked. But you have not seen.

You have looked. But you have not seen. FUCKING BLIND FUCKING FUCK

It is all wrong. 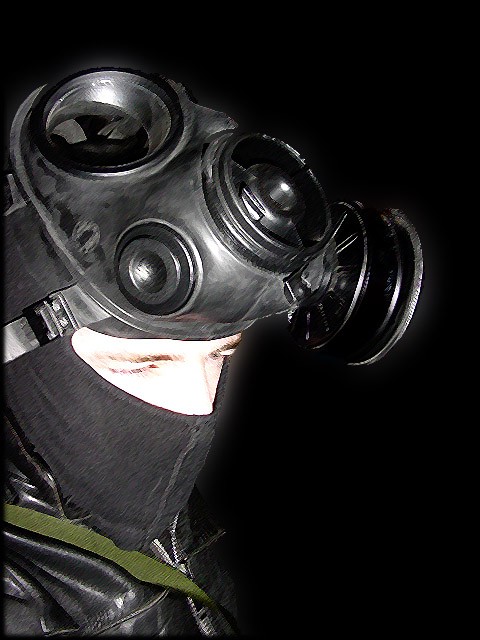 It was a plague wasn't it?

What is wrong with them? 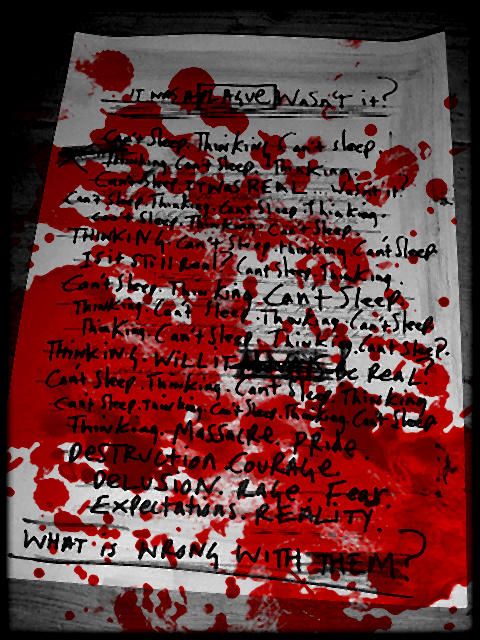 Somewhere A Clock Is Ticking


I've got this feeling that there's something that I missed
The clock is ticking The bell is tolling They all attempt to alarm you For the need of the good deed you must do
I could do most anything to you …
The clouds are gathering The birds are leaving The attempts never stop When you are in need of good deeds to lift you up
Don't you breathe
Eyes are staring Hell is stirring Everybody wanted to save you So you won't be a member of the black army
Something happened that I never understood
You can't leave People you knew You are standing still In the same spot where you were killed
Waiting for an angel Or would it be a devil Will you be dragged to hell? Or will you be lifted up to heaven
Every second … dripping off my fingertips
The clock is ticking Declaring the coming Of an imaginary demon To disturb the dead On earth and heaven
Wage your war
She never sleeps with no motion Her face with no emotion She keeps saying her prayer No memory of salvation for her lover
Another soldier says he's not afraid to die
He runs in panic With each tick frantic He, a blasphemous neurotic, Yet she prays for him, oh how ironic!
Well I am scared
Tick-tock, the clock is ticking Run fast, from your fate you can't keep fleeing Time is running
In slow motion the blast is beautiful
Run fast, but you can do nothing
Doors slam shut
You'll try to run away Want to get away Find another day But you are alone in your misery
A clock is ticking … but it's hidden far away
Run fast, but you can do nothing
Safe and sound

“And only now do i begin to wonder ... could it be that they have another reason?”


Do they even need a reason? Do they know something i don’t? But how could that be when they can’t even think?

How can a dead body continue to walk around as if it is still alive ...

Unmoved by this victory and the seeds of death it has sown.

At this point in time i am convinced beyond all reasonable doubt that the one and only reason I am still alive is because i have remained undetected. Trapped In this house, in this place.

They do not know i am here ... so why do they not just leave?

Why do they stay here?

Everything is white always black as far as the eye can see.

Shrouded in a fine white frost.

It was like that when i first looked out during the half light this morning.

Confirming the arrival of another winter with the first of many days yet to come each containing a temperature falling into minus degrees.

The accompanying fog which had coexisted throughout the early hours has long since lifted, revealing nothing else of interest except for a noticeable drop in the number of those things which had been clustered around the barricades for the past few months, but the frost has remained intact all day.

And the half light.

A flashback to my childhood. Early morning. Standing in front of a large window. I remember looking out and seeing the ground where no one had yet walked. No footprints to ruin the smooth white surface which had appeared during the night. And myself content with just looking. Safe inside. Not wanting to walk there for fear of ruining the picture for others.

A distant memory of the exact same scene from a vastly different perspective.

“It is useful occasionally to look at the past to gain a perspective on the present” (Fabian Linden).

I stared down at the street from the window above and noticed the front section of my car parked up beneath the window. The topside and front windscreen covered in a slightly thicker layer of white frost, and while initially I was relieved that the car had remained intact throughout, i felt more dismayed the longer I thought about it. It has been several months since i last went out into the street, longer still since I had been actually been in the car, and i soon realized that the engine is not likely to turn over without some essential maintenance.

It did not bother me as much as i had previously imagined it would … but then nothing much does now.

I will take a look through the manual and some other related books later on tonight and attempt to get out for a closer look during the next few days. I can check the oil, the water, tire pressure and electrics, all of which should be fine, but from memory the only problem i ever had with the engine not starting always happened during the cold weather. Something to do with either the starter motor or the alternator but no doubt the battery will be drained and in desperate need of a charge.

When I get out there I should bring in the pistol from the glove compartment and give it a wipe down, and also switch the bottled water stored in the back for some fresh water while i still have the chance.

Pride through simple loyalty. The original. 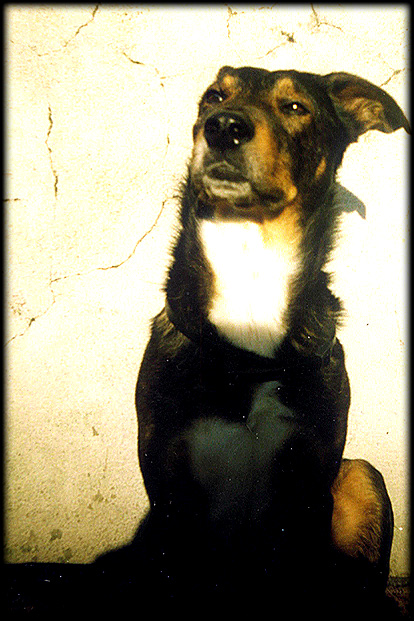 
It has been three years today since he left and i have barely spoken a word since.

I miss him as much as it is possible to miss anything in this world.
Collapse